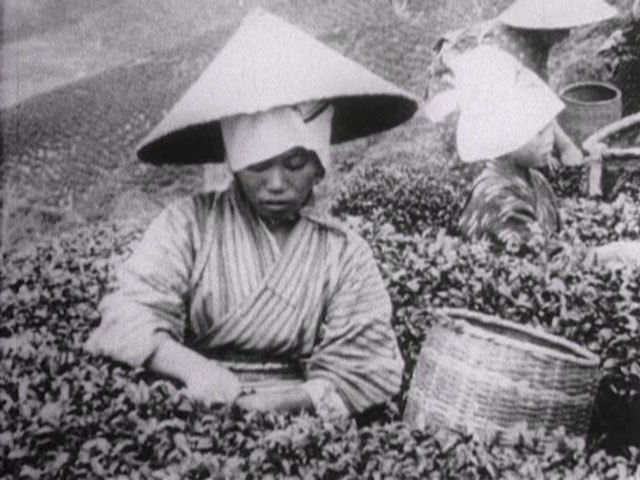 From the first days of film exhibition, celebrated travelers used movies to enliven their public lectures, as earlier adventurers had used lantern slides and dioramas. Beautiful Japan, excerpted here, is an epic travel film for 1918, running over two hours and, as an intertitle proudly announces, touring 5,800 miles of the country. The lecturer generally accompanying screenings was Benjamin Brodsky, based in Los Angeles, first seen here tracing his itinerary from Tokyo on the map of Japan. This film followed Brodsky’s A Trip through China (1915), on which he claimed to have spent ten years shooting one hundred thousand feet of film.

Beautiful Japan seems to have been sponsored by the Imperial Japanese Railway to promote tourism. BRODSKY’S MOVIES TOUR THRU JAPAN proclaims the banner across a train car pulling out of Tokyo. Our excerpts sample three aspects of the country. Brief shots of a ship launch at Yokohama reveal Japan as an industrial power at the end of World War I. On the large northern island of Hokkaido, the tour encounters a village of the indigenous people of Japan known as the Ainu (the word for “humans” in their language). The climax of the Ainu’s annual iyomante, or “bear-sending,” ceremony that the film documents is the strangulation of a bear cub. (Viewers may be glad to know that no such killing is shown in the full film, and it is likely that Brodsky asked the villagers to stage parts of the ceremony for his camera.) In the Pacific port city of Shizuoka (“Shidzuoka” in the film) south of Tokyo, we glimpse the region’s tea production and “traditional” culture. As an intertitle puts it, “The busy Geisha girls are unwearing [i.e., unwearying] throughout the Cherry Blossom Festival in gracefully entertaining the foreign visitors attracted by Japanese scenic beauties.”

Travel films tell us as much—probably more—about the attitude of the traveler as about the place visited. Beautiful Japan intends to be little more than a travelogue. As the years go by, however, it becomes a political and ethnographic time capsule. When the United States entered World War I in 1917, Japan became its ally against Germany. Brodsky’s film was one of at least two American travel features of 1917–18 that found Japan more “beautiful” than it had seemed before. The point of view and the intertitle language also cannot help being distinctly American. The final excerpted shots of Benjamin Brodsky dancing in the geisha house remind one that part of a geisha’s training was to learn to laugh with her clients. —Scott Simmon

About the Music
As mentioned above, some travel films were “accompanied” by lecturers, depending upon the venue and the exhibitor’s aims. Benjamin Brodsky not being available to supply us with his words, how­ever, it is left to music to vivify, clarify, and unify this footage. As it happens, because several segments show dance performances, much of the music has a more or less “realistic” function.

This is not, however, intended as an “ethnically authentic” score: Brodsky shows us Japan through American eyes. He presented his films to American audiences, and when such films were exhibited in commercial theaters during the twenties, they were almost always accompanied by Americanized “Japanese” music. That is the tradition followed here, with no difficulty, because throughout the silent period every musical anthology contained great quantities of so-called “national” music pieces to be played for scenic shorts as well as for features set in foreign lands.

I have drawn several pieces from volume 2 of J.S. Zamecnik’s Sam Fox Moving Picture Music (1913); one of them is an “Oriental Veil Dance,” which accompanies the scene of the girl dancing on a public street. I also have drawn from Otto Rapée’s anthology Motion Picture Moods (1924), including his reasonably authentic version of the Japanese national anthem for the early scene of Brodsky mapping his tour. Two other pieces from Rapée are by Otto Langey and H.R. Shelley; these accompany the tour of the Asano shipyard and the lengthy “Turtle and Crane Dance” by the geisha. (Still another section of Shelley’s piece, of a very different character, accompanies portions of Rev. Sensho Sasaki’s Japanese American Communities.)

Only for the final scene is there a rupture of stylistic consistency: When Brodsky takes one of the geisha in his capacious arms and swings her around the floor, I switch to the strains of “Goodbye Girls, I’m Through” (Golden, Caryll, 1914)—ironically, a song that first appeared in the Broadway “musical fantasy” Chin Chin. —Martin Marks

About the Preservation
Beautiful Japan was preserved by the Smithsonian Institution’s National Museum of Natural History from a 16mm print donated by Sarah Morris (Mrs. William Machold), daughter of Roland Morris, U.S. ambassador to Japan at the time the film was made. Although the visual richness of the film’s original 35mm format has been lost, it is fortunate that the 16mm reduction print survives.

Further Reading and Viewing
For more about Brodsky see Law Kar and Frank Bren’s “The Enigma of Benjamin Brodsky,” in the Hong Kong Film Archive Newsletter, no. 14 (Nov. 2000) and Li-Lin Tseng’s more recent article “The Story Teller: Benjamin Brodsky and His Epic Travelogue, A Trip Through China (1916),” in The Journal of Northeast Asian History (Winter 2013).

Brodsky repurposed footage from Beautiful Japan a year later in A Trip through Japan with the YWCA (ca. 1919), a section of which was recovered through a preservation partnership with the National Film and Sound Archive of Australia. Also recovered from overseas was surviving footage from A Trip through China (1915), found in the New Zealand Film Archive.