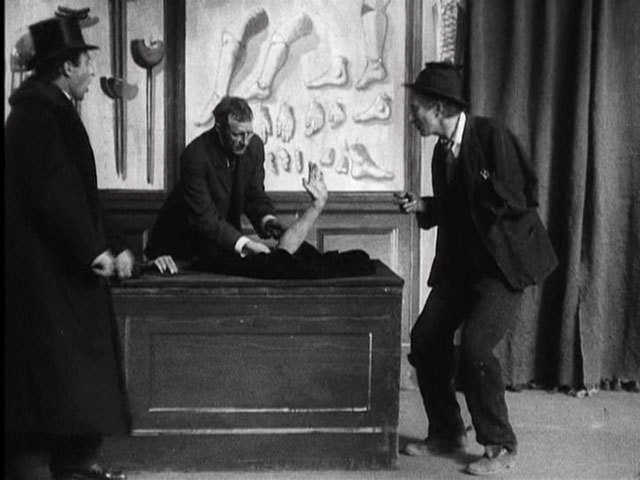 The outrageous freedom of early film is one of its greatest pleasures. The first narrative movies are not so much uncensored as untamed, not yet held captive by decorum. This is the side of “primitive” cinema admired by French surrealists, who saw in it a means of unlocking the irrational and unconscious. But surrealists seldom had opportunity to see films quite like The Thieving Hand.

Filmed in Brooklyn by a now unknown director and released in January 1908, The Thieving Hand was a product of the Vitagraph Company, whose founders pioneered special effects films in America, as with 1909’s Princess Nicotine. The tricks in The Thieving Hand—stop-motion substitutions and movement by hidden wires—are simple but flawlessly executed.

The dreamlike story follows a destitute, one-armed street peddler. His honesty in returning a ring dropped by a philanthropist is rewarded when the man escorts him to a “Limb” store to buy a new arm. Unfor­tunately, the arm takes instructions only from the id (reminding us now of Dr. Strangelove’s irrepressible arm). Because the final frames of the film’s last shot are missing in the sole known surviving copy—preserved by George Eastman Museum and reproduced here—the moral circle is incomplete: In the prison cell, the arm crawls back to its original owner, a one-armed thief in convict’s stripes, and the poor pencil vendor is set free from both the prison and the tyrant arm.

The Thieving Hand faced criticism for, of all things, its social inaccuracies—a mark of how rapidly realist logic was supplanting irrational verve. “The closing scene spoils an otherwise perfect reproduction,” reported Moving Picture World. “No suspect is placed among convicts until he has had a trial.” —Scott Simmon

About the Music
Most of the music for this film is from the world of ragtime. The principal piece is a comic song that appeared the same year, “The Yama-Yama Man” (Davis, Hoschna, 1908). The opening verse explains the nonsensical title as a name for a scary figure (like the bogeyman); subsequent verses poke fun at New York life, from the theater to streetcar fares. In other words, the song conjures up things weird and “out of joint,” and its somewhat sinister moments are just right for The Thieving Hand’s grotesqueries. For the rest, in­spired by the film’s title, I used strains from “That Hand-Played Rag” (Silverman & Ward, 1914), as well as a segment from “Sponge” (1911)—one of the only ragtime pieces I know of that has a strong “Yiddish” inflection, making it an apt choice for the pawnbroker’s scenes. “Sponge” is by Walter C. Simon, who also composed the early published score for The Confederate Iron­clad. Finally, I couldn’t resist thieving the main tune from the song “I’ve Got Rings on My Fingers” (Weston & Barnes, Scott, 1909) at an obvious moment.

One year after The Thieving Hand was released, some early critics of film music began to take nickelodeon pianists to task for playing such repertoire (rags, silly popular songs) far too much, for all sorts of films, often with ludicrous results. But such music is surely apt for this film, which has not a solemn bone in its body. —Martin Marks