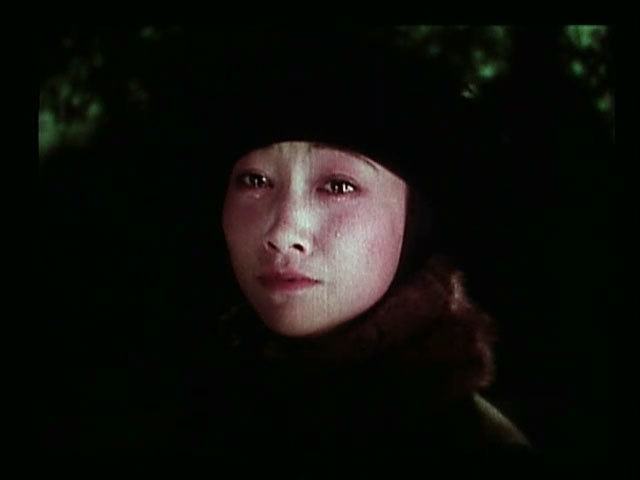 The Toll of the Sea is one of the great technical achievements of film preservation. This earliest surviving feature in the two-color Techni­color process was restored by UCLA Film & Television Archive from a rare camera negative. (Most silent films survive only through copies from projection prints.) Also surviving at the Library of Con­gress is the film’s 1922 music score (discussed below), accompanying the film here for the first time since its original release.

Color was part of movie exhibition from the earliest days, when a few films were colored by hand (as with the stencil color on Three American Beauties). By the 1920s, more than 80 per­cent of U.S. feature films were artificially colored by less labor-intensive pro­cesses that added uniform tints to certain sequences. (Silent films are usually black and white now only because their color effects have been lost over the years; in this anthology tints are preserved in the features Hell’s Hinges and Snow White and in the one-reel Lonedale Operator.)

The Technicolor Motion Picture Corporation was the most successful early company to take a more sophisticated approach. Through complex optical engineering, its cameras captured natural colors during filming. The Toll of the Sea was the company’s first feature using a pro­cess that produced color prints for standard projectors. The camera’s beam-splitting prism separated the green and red portions of the spectrum, recorded on alternate frames of a double-length, black-and-white negative. For each release print, two thin strips of film were dyed the correct colors and cemented back-to-back. The limitations included the loss of the blue scale (incorporated after 1932 into Technicolor’s three-color system). Exhibitors complained that the sandwiched prints tended to buckle and go out of focus. Nevertheless, for 1922 it was a remarkable color process.

For all its technical virtuosity, The Toll of the Sea is hampered by its scenario, by Frances Marion, then Hollywood’s highest-paid writer. In fairness, she was working under the requirement that the story first show off the color process. (The colorful Far East was created in Santa Monica and Hollywood.) “The only person, in fact, who seems to have had anything against the picture is the title writer,” complained the New York Times about intertitles that spell out emotions conveyed with more complex­ity by the actors. About her “original” story Marion acknowledged, “I must admit that it was practically the step-daughter of Madame Butterfly.”

The exotic orientalism of Madame Butterfly’s Japan migrated to China for The Toll of the Sea. Frances Marion was hardly the first to borrow the story for film. Her friend and collaborator Mary Pickford had starred in an early feature-length Madame Butterfly in 1915, and there were innumerable remakes and variations. The Toll of the Sea pares down to essentials the story as popularized on the stage by Belasco and elevated to operatic tragedy by Puccini: An American man marries a young Asian but leaves her for a woman of his own race back in the United States. After he learns of his mixed-race son, his understanding white wife urges adoption. In an act of self-sacrifice, the Asian woman kills herself for her child’s future. (The problematic mixed-race adoption is evaded in The Toll of the Sea by making the son appear wholly Caucasian.)

In outline, there are few uglier tales of the (male) West exploiting (female) Asia. But, as in so many melodramas about a woman’s sacrifice for family love—of the sort once labeled “women’s weepies”—the performance of the actress can elevate the Madame Butterfly tale into a critique of Western cultural assumptions and male sexual prerogatives.

According to Dr. Daniel Comstock—one of Technicolor’s three founders—it was difficult to get the more seasoned actors to treat the film as a serious project. The actors had known of so many failed color experiments that few expected The Toll of the Sea to reach the screen. This may have been the case with Kenneth Harlan, a veteran stage star from age seven who plays the American, but his occasional looks of disinterest only reinforce his character’s weak-willed villainy.

The hackneyed story and the technical need for intense lighting make the subtle performance of Anna May Wong all the more remarkable. Motion Picture News noted that the heroine was played “by a real Chinese girl,” as opposed to the usual casting of whites for lead Asian roles. Born in Los Angeles’s Chinatown, Anna May Wong was just seventeen in this first starring part. “She never repels one by an excess of theatrical ‘feeling,’” said the New York Times. “She has a difficult role, a role that is botched nine times out of ten, but hers is the tenth perfor­mance. Completely unselfconscious of the camera, with a fine sense of proportion and remarkable pantomimic accuracy, she makes the deserted little Lotus Flower a genuinely appealing, understandable figure. She should be seen again and often on screen.” This prophecy was fulfilled even though substantial roles for Chinese Americans were scarce in Hollywood. Anna May Wong found success also in British and German films. In her most celebrated American sound film, Josef von Sternberg’s Shanghai Express (1932), she is refreshingly unself-sacrificing. —Scott Simmon

About the Music
For this feature I was pleased to be able to use the compilation score prepared for the film in 1922 and published in 1923 by Photoplay Music Company of New York. Although we know very little about Ernst Luz, who compiled the score, sources indicate that he was active as a composer, compiler, and conductor of film scores from the early teens. During the twenties he became head of music for the “Loew’s circuit”—Metro Pictures’ chain of theaters. Normally he prepared music cue sheets to be distributed with the company’s films. The Toll of the Sea is one of only seven films for which complete “Luz” Music Scores were published, all prestigious Metro productions made between 1921 and 1923.

The score for The Toll of the Sea is exemplary of mainstream practice at that time. The music is laid out in a “piano-leader” format. That is, most of the music is conceived for piano, but some segments also include optional cues or melody lines for other instruments, to facilitate performances by small orchestras. Luz also provides important preliminary instructions as well as a list of the score’s contents. Surprisingly the list contains only seven distinct titles—a rather small number for a feature film. However, each piece is divided into several contrasting segments, and these recur selectively at different points, so that the score sounds more varied to the ear than it looks on the page.

Undeniably, though, the score is limited in repertoire, and it is dominated by music in what was then called a “Japanese-Chinese” style. Still, it achieves a rich range of moods, with moments of humor, pathos, pastoral lyricism, and passion. Two of the most effective “exotic” pieces are “By the Japanese Sea,” by Hauenschild (containing the score’s most sonorous and tragic themes, including the one at the opening), and “Japanese Legende,” by Kempinski (songlike love music, introduced during the first scene between Carver and Lotus Flower). Also effective, and much more “Western” in character, is a musical reverie by Luz (from a piece he called simply “Pathetic Suite”). It first underscores the scene when Carver tells Lotus Flower he cannot marry her and recurs after he returns with his American wife, when all three sit together in the garden.

Given the similarities of the film’s plot to that of Madame Butter­fly, musicians would have been tempted to accompany The Toll of the Sea with snippets from Puccini’s score. But the “toll” would have been high: legally for violation of the copyright still in force, and aestheti­cally for calling attention to the film’s borrowed rather than innovative elements. (“WARNING,” wrote Luz in his introduction. “Do not use Madame Butterfly . . . to this picture, unless you have permission from the publishers or composer.”) Nevertheless the Luz score at times does resemble Puccini’s, and from time to time I strengthened these allusions. A pianist is able to depart freely from printed music in response to a picture, unlike a pit ensemble that must generally stick to the notes on the page. I hope that my improvisatory liberties enhance this lovely film and reveal some of the expressive potential of Luz’s distinguished score. —Martin Marks

About the Preservation
The camera negative was deposited at UCLA Film &Television Archive by Technicolor Inc. The complex restoration was by Richard Dayton and Pete Comandini of YCM Laboratories and Robert Gitt of UCLA, who also supervised the color correction on this video transfer. As explained in UCLA’s headnote on the film, its final minutes—including Lotus Flower’s suicide—have not survived and are summarized in re-created intertitles drawn from Frances Marion’s synopsis.

Further Reading
Gina Marchetti analyzes Hollywood’s treatment of Asian/Caucasian sexuality in Romance and the “Yellow Peril” (University of California Press, 1993). Cari Beauchamp provides biography with a social context in Without Lying Down: Frances Marion and the Powerful Women of Early Hollywood (University of California Press, 1997). Anna May Wong is the subject of two biographies: Anthony Chan’s Perpetually Cool: The Many Lives of Anna May Wong (Rowman & Little­field, 2003) and Graham Russell Gao Hodges’s Anna May Wong: From Laundryman’s Daughter to Hollywood Legend (Palgrave Macmillan, 2004).